Until Prince, pop music stood for everything that wasn’t classical or jazz. After Prince, pop music basically took what Prince and Michael Jackson created and continued doing the same thing up through Taylor Swift’s 1989. Meanwhile, rock (including grunge and hard rock), hip-hop and country each spun off into its own sphere. They were kicked out from under the pop umbrella.

I’m not saying Prince broke pop music, but he may have ended its monopoly.

Prince is a deeply personal subject for me. I consider myself a rock music historian (or at least a snob) and he’s in a handful of artists that I listen to as if they were their own genre of music. Sometimes you don’t need jazz or rock—you just need Prince.

Recently, I joked that I was going to take a couple of months and keep going to Prince’s club in Minnesota until he showed up. The last time he came to Denver, I didn’t have $250 to spend on a ticket. Now I wish I had taken out a loan. From videos, live recordings and bootlegs, it’s clear there was nothing quite like a Prince show.

When I was in middle school, Prince was not cool. I remember listening to him frequently on my iPod. That was back when you had to buy tracks one at a time. I spent a lot of time listening to Raspberry Beret, 1999, Little Red Corvette and the dance version of Let’s Go Crazy, which features a longer guitar solo (more on this song in a minute).

When people asked what I was listening to they were taken aback when I answered “Prince” in a way they weren’t when my response was Marvin Gaye or the Clash. They would ask, “Is he still, ‘the artist formerly known as Prince’?” Or worse, “you really listen to him?”

To middle school students (even at an arts school), I think Prince was still too out there, too sexual and too complicated—which is why I think he made a comeback among my peers during the exploratory phase of high school. No one sits around and listens to Prince like they do with Zeppelin, he just becomes a part of your life.

There are very few moments in music that I place in as high esteem as the sermon at the beginning of Let’s Go Crazy, perhaps the interlude of Springsteen’s Jungleland, the piano fade down of Layla or the first notes of the Ronnette’s Be My Baby. Let’s Go Crazy feels like a life force, and it’s the only song that makes me understand why people like EDM so much.

I’ve never seen Purple Rain. I never followed much of the cultural stuff with Prince because I love his music so much, and that was fuel enough for me. If Prince wasn’t Prince, he’d be considered one of the greatest guitarists that ever lived. On Rolling Stone’s list he’s number 33, but he could definitely duel anyone out of contention, except for maybe Hendrix, if his live recordings are any evidence.

Prince was my David Bowie and Michael Jackson. His death hit me the way I would react to the murder of Bugs Bunny. My favorite graduation gift was a Prince Bootleg album. I once made my friend Rose listen to Prince for hours on a road trip from Austin to Denver because she said she’d never really heard him.

Thanks for keeping the world turning for me with all those revolutions, Prince. 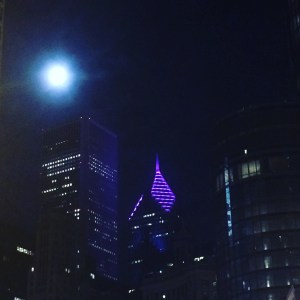